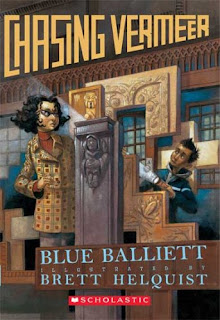 Chasing Vermeer is a fun children's book, easy to read, with pictures that involve some thought, if you want to put that thought into it. (I am lazy, I did not.) I have some overall questions about the tack the book takes on Charles Fort and how it veers a little bit into magic without ever exploring that, but hey, a children's book that might introduce kids to Charles Fort? I'm pretty much in.

The two main characters, Petra and Calder, are those kids who don't quite fit in. Petra is interested in art, Calder in math and puzzles.  They go to a Montessori school, it appears, but with a new teacher? Wait, that doesn't make sense. Unless I missed the part where their old teacher left for some reason, because my understanding of Montessori schools is that the teachers move with their classes through the grades. Yes? No?

At any rate, they have an awesome teacher who lets the kids explore and get excited about learning and that all sounds great. Then, out in the real world, a Vermeer painting is stolen, and letters are sent to the newspapers saying the painting won't be returned until all the galleries of the world look carefully at their Vermeers and reattribute some of them.

Three people in their neighbourhood are somehow involved, and Petra and Calder set out to figure it out, and find the painting. On the way, they run into a book by Charles Fort and his ideas about ideas science damns because it can't explain them. Including synchronicity.

However, the author's idea of Fort tends to shade over into magic, without acknowledging that that's what's happening. The kids start to dream about paintings they've never seen, figuring out where to look for the painting by looking at unrelated puzzle pieces and just knowing. That's intuition, not damned science. Fort was about examining the actual evidence and then drawing conclusions based on that, not necessarily on the next clue just literally popping into your head, and you knowing, not based on evidence you didn't know you had, but based on nothing at all.

If you want to go this way, explore it. Just shouting "Charles Fort!" at the page doesn't really further anything.

There are lots of puzzles including a cipher to figure out, and shapes and animals in the pictures that are supposed to reveal something, but I was not curious enough to find out. It's a cool idea though, and great for kids with that kind of bent.

However. The blurb talks about the mystery coming together with a satisfying "aha!" and I would disagree. Having mentioned the person who will turn out to be the art thief just once at the start of the book completely incidentally does not make this into a mystery the reader feels like they could solve. The fact that the characters have never really met the person who turns out to be the art thief (well, Calder may have, but the readers certainly never do) makes this not so much a mystery, more an adventure story.

In conclusion, it's not superb, but it is a fun children's book, and it makes art attribution interesting, which is a bit of a feat. If only they'd stop using Charles Fort as a shorthand for otherworldly knowledge, I'd be happier. (Fort still wanted explanations, he just didn't want to dispose of evidence that didn't fit the theory. So get into some explanations, please. There is no theory as to why the kids know where the painting is hidden. They just suddenly look at an unrelated puzzle piece and know it's somewhere they didn't even know existed.)
Posted by Megan Baxter at 05:35