The Beast of Cretacea by Todd Strasser 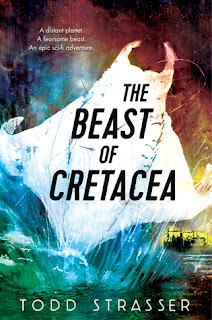 I think I've mentioned one of my ongoing projects before - I take my Top Ten lists from the previous years, look at the "read-alikes" on NoveList, and read those. Mostly, I haven't loved the suggestions they've made - I can see why they were made, but prove, yet again, that a story is not what it is about, but how it is about it.

It's for that reason I keep doing it, even if this project has only resulted in one new book I loved (Michael Chabon's The Yiddish Policemen's Union, which created a nice chain by ended up appearing on this year's Top Ten.) It's interesting to see what other authors do with milieu or ideas somewhat similar to books I loved, even if they're not done as well. It's fascinating to try to parse out why what worked in one place didn't in another.

I bet you can see where this one's going, huh?

I read Beast of Cretacea because it popped up when I plugged China Mieville's Railsea into the database. And yes, absolutely, they are both science fiction retellings of Moby Dick. Interestingly, Strasser hews much, much closer to the set dressing of Melville's original, but stays much further away from the themes than does Mieville.

Both of those are reasons I loved Mieville's version much more. I absolutely adored Railsea. It was so totally its own thing, while paying interesting homage to themes of obsession and philosophy, as well as adaptation to the strange world in which the moling trains (or whaling ships) set sail (or track).

So, for a take-off of Moby Dick, what is Beast of Cretacea about? Earth is just about used up - oxygen is in short supply. The entire planet enveloped in The Shroud, meaning they haven't seen the sun in longer than anyone can remember, and everything is made in factories that continue to destroy even as they sustain. The main character, who is, no shit, named Ishmael, decides to go off planet to try to make enough money to help his foster parents and brother escape as well. He ends up on the Pequod, on a planet they call Cretacea, hunting mammoth sea creatures for their meat and...something else.

We see him try to find his spot on the Pequod, while continually getting into trouble because he just can't stop standing up for those in trouble. And this is fine, as far as it goes, but because Strasser feels the need to constantly remind us of the original by naming characters the same (except for the added women characters), it rings a little false. Maybe I've just read Moby Dick too recently.

Queequeg is there, as are Starbuck, Daggoo, and the others, but, well, they all seem pretty white. Or at least, if they're not, it's not done in such a way that I noticed it on a quick read. (Since I don't think visually, it is fairly common for me to miss visual cues. However, this is a book that seems remarkably free of race or ethnicity, and given the original, well, that grates a bit.)

I would also strongly argue that if you are naming your characters after Melville's originals willy-nilly, you cannot get away with also having character exclaim "Melville's Ghost!" repeatedly. Just...no. It's too cute. Stop it.

So, while the set dressing is Moby Dick, the story takes little from the original except that Ahab really wants the white whale-like thing.  But the book is not about obsession in the same way. Ishmael is not obsessed with whaling, and Strasser makes the terrible choice that Ahab can't just be obsessed with the whale because of his leg and because he's obsessed - no, this whale-analogue also killed Ahab's wife and child. I am not kidding.

It's too much, and adding backstory like that is so unnecessary and dumb. Not everything needs to be explained down to its component parts, and part of Moby Dick is that it is irrational.

We also get thrown into some politicking around the evil corporations that have been killing the Earth and all its inhabitants, and their desire to enslave the few viable colonies that have sprung up on Cretacea, but this is right at the end.

So, this book is okay, I guess, but there are major faults, and what Railsea does right, this does wrong.
Posted by Megan Baxter at 09:00