The Curse of Chalion by Lois McMaster Bujold 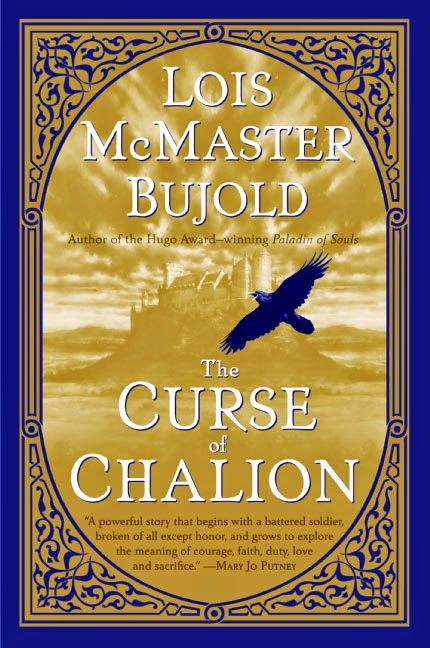 I realized something as I was reading this book. Many fantasy books, when they involve any kind of court culture, have as their viewpoint character someone who doesn't know how it works, and blunders around until he or she figures it out. It's relatively rare to have the main character be someone who does know exactly how things work. Cazaril, the main character, is such a man. He isn't a quintessential courtier by any means, but he knows how things work.

Because he's eventually the secretary and tutor to the half-sister of the King, we get to see him instructing his charge in the niceties of that life, and the perils, and that works to fill us, the audience, in just as well. It's interesting to read from the point of view of someone who is intelligent and knows what's what. I appreciate it. And it's something Bujold does exceptionally well.

Of course, he's more complex than that. An honest military commander, he was sold out and sold into slavery in one fell swoop by his enemies, offended by both his refusal to be bribed and his knowledge of certain unsavoury events. Released at long last, he is nearly dead by the time he makes it back to the court he has known, where he hopes for a small bed and a quiet life.

The Countess has different plans, putting him in charge of her granddaughter as her granddaughter and grandson go to court to take their places as the heirs presumptive to their half-brother's throne. Which puts him right back in the path of those who tried to dispose of him in the first place.

It sounds complex, but Bujold has a knack for parcelling out just the right information at just the right time, so it beautifully hits that middle ground between infodump and opacity. And having Iselle as his pupil is just right - she's smart, she gets it, and then she even starts to think a few steps ahead of Cazaril himself.

Oh right. And then he becomes a saint for one of the Five Gods. Being a saint is not as plum a job as you might think, and comes complete with complications that might very well kill him. In several ways, very quickly. Of course, there is also the eponymous curse, which he must forestall from falling on his charge. I quite enjoy Iselle's practical acceptance that she must marry for an alliance - and that if she must, it might as well be a beneficial one, with a husband who might turn out to be satisfactory on the personal front as well. That's a bonus, not a requirement. She is not going to swoon and insist on true love.

There's a lot here about duty, about running a kingdom, about being uncomfortably touched by the gods. I just love Bujold's books is what it is. She has a knack for laying groundwork that in the end, nicely dovetails into other aspects of the book, and that is always immensely satisfying. In the hands of a lesser author, it might feel false. With her books, I always feel like I'm in the hands of a master storyteller, and here, in a fantasy world far removed from what I'm used to when it comes to her Miles Vorkosigan SF, it works just as well.

This is the last book in my Lois McMaster Bujold care package that arrived from a dear friend. I have thoroughly enjoyed every single book in it, and I'm sorry to be done.

I read this book as part of an attempt to read all the Hugo Nominees
Posted by Megan Baxter at 05:23