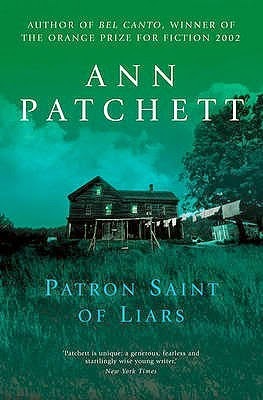 This is the third Ann Patchett book I've read. Of the other two, the novel I really disliked, and the memoir I found only so-so. They weren't enough to put her on my do-not-read list, but for authors that I only like a bit, I tend to figure that if I don't like them by the end of the third book, it's not going to change, and I can gratefully set them aside. That's where we were starting this book. I was expecting this to be my last. Now she has a reprieve.

To my surprise, I liked Patron Saint of Liars quite a lot. It worked for me in a way State of Wonder and Truth and Beauty didn't. I'm having a bit of trouble putting my finger on exactly why that is, but the main characters are, while being stubbornly and sometimes mulishly themselves, aren't dumb. They may have irresistible impulses that aren't the best, but they don't try to dress them up with pseudo-philosophic justifications for inaction that depend on lame analogies about only having to go into Hell once in your life.

(Apparently I'm still angry at State of Wonder. One would think I would have let that go by now. Nope!)

Rose, the main character, is the one who does things that are on some level inexplicable, but because she's not trying to come up with fancy moral justifications for them, it doesn't bother me the same way. We're supposed to find her a bit frustrating, I think. While also liking her.

Rose runs away from a perfectly nice husband while she's pregnant. She's not sure why, but marriage isn't what she thought it would be, and the romance between her and her husband is less than she was expecting to be delivered by Heaven into her lap. (Huh. That's two books I've reviewed in short order where the main characters expect happiness to just show up, and are dissatisfied when it doesn't.)  She ends up at a home for unwed mothers, gives birth, gets married again, and stays on as a cook at the home.

Only the first third of the book is from her perspective, and it's the most important, because it gives us a glimpse into who she is and why she does what she does, and it's the only glimpse we'll ever get. She's difficult, and frustrating, and interesting because of it. And the lack of explanation, even to herself, as to why she's done what she's done, somehow that makes her work.

The next two thirds are from her new husband and her daughter, respectively. To them, she is even more frustratingly opaque than she is to the reader. They don't even know what we know. She's not warm, she's not giving, she doesn't share herself. They love her, but there's always a tenuousness about her presence. Patchett does a really good job of conveying the feeling of impermanence without having it be in the least flighty or fluttering. Rose is solid. But she may not always be there.

It gives the book a tension, and weight, that I haven't found in her other books. It's interesting that it's here, in her earliest efforts, and I haven't found it in a later one. But this is enough to keep me intrigued and give her another chance. Maybe just one. We'll see how it goes.
Posted by Megan Baxter at 05:24