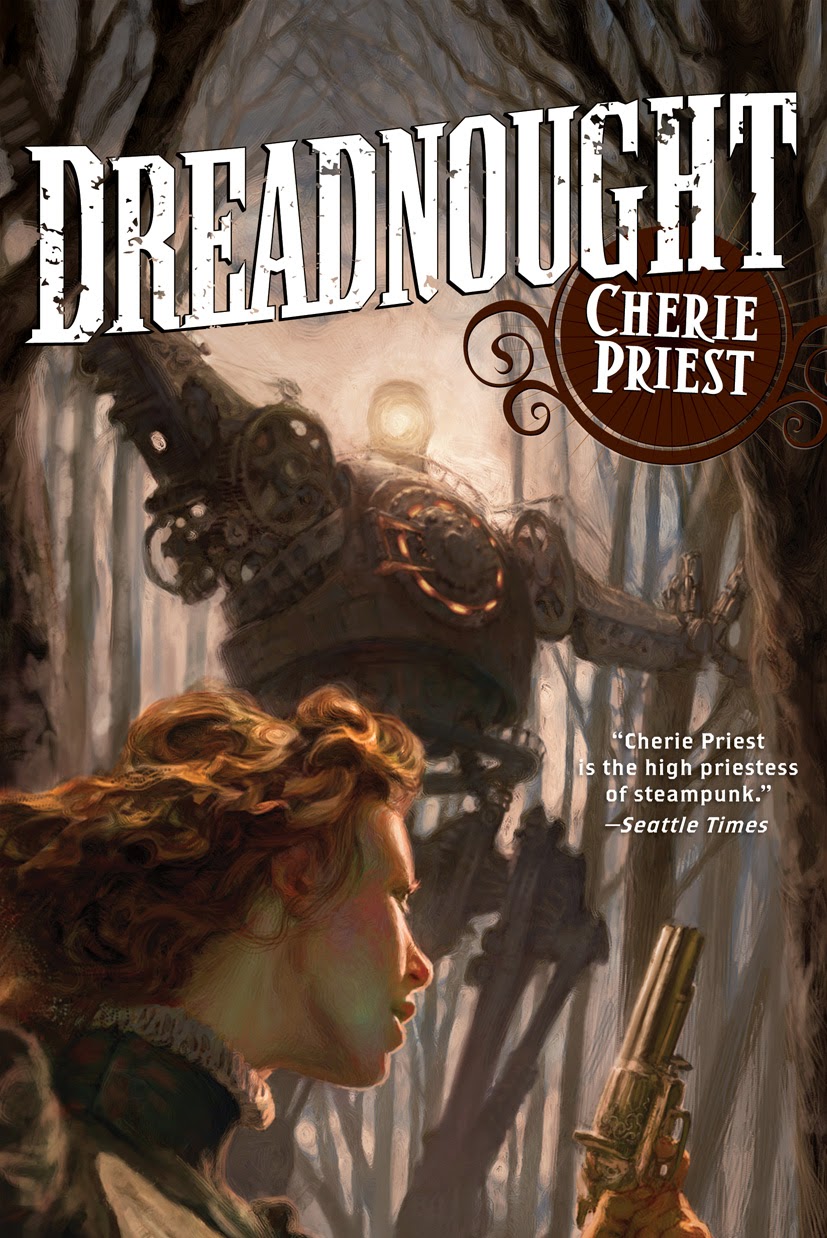 Three books seems to be about the amount I need to decide whether or not I'm going to continue to read an author's books, unless they do something right away to piss me off. This is the third Cherie Priest book I've read. Unless something major happens, it's also likely to be the last. I'm just not getting enough out of them, and there are things that nag.

Also, I feel like the actual important events that happened in this book could have been condensed down into a couple of chapters in a different novel, rather than being stretched out over the length they were. I have not much patience for novels that are about a journey, that take pages and pages, but end up with the person merely having finished their physical journey, and not really taken an emotional one at all.

If, when you get off the train across the country that has taken hundreds of pages, and you're the same person you were when you got on, there's a problem. When all that has happened in the plot is that you've discovered that the evil drug-fueled menace we saw in the beginning is an evil drug-fueled menace that the army wants to exploit? Maybe that could happen in less space.

Not enough incident, I'm afraid, stretched out far too long.

So there's that. Really, though, what's making me put these down is the continued unease with Cherie Priest's insistence that her Civil War (which goes on much longer than the real one) has nothing to do with race. Every southerner we meet has no problem with Black people. Every northerner we meet is genteely racist. (It would be perfectly fair to make the point that people in the North were racist too, but you can't take something like the Civil War and try to make it okay to write about the South as your heroes by trying to erase race and slavery from the equation.) States rights, sure. But let's not forget that the specific states right they were fighting for was the right to own slaves.

It's disturbing, and it bugs me every time it comes up. Real people died. Real people were enslaved, suffered racism, war, deprivation, death. Trying to erase that from history, even if it's a fantasy version of history? It's not okay. Not even a little bit. You don't want to incorporate uncomfortable aspects of race in 19th century America into your book? Don't write about a fictional version of the Civil War.

In this one, Mercy, a nurse for the South, travels to the Pacific Northwest, to the territory of Boneshaker, to find her dying father. On the way, she must travel with Northerners and get attacked a whole bunch because these naughty Northerners are transporting something the South doesn't want them to have. Because the whole book is pretty much spent with the North, it means that, again, we get a heaping dose of how the North is just as bad, while at the same time, continually making excuses for the South.

It's frustrating, and I'm done. I might have stuck it out a bit longer if the story had been good, or the characters, but they weren't either, and I'm calling it quits.
Posted by Megan Baxter at 04:52