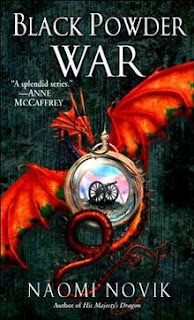 I have defended the previous books in this series. Without ever really loving one of them entirely, I have argued that they're entertaining, and for the last one, that it's an interesting variation on the naval novel, just with a dragon. But you know what? I've read this one, and although there's nothing that upset me about it, nothing particularly wrong with it, I think I'm done with the series.

There's never been anything particularly wrong here, but there just isn't enough right for me. Long travelogues, I could do through one book. Long descriptions of military tactics and battles, I could do through one book. Over several, and more, with more to come? Despite this one ending on a bit of a cliffhanger for the outcome of the Napoleonic War, I just...don't care.

I have no patience for military novels. I had the opinion that War and Peace would have been so much better if we could just have skipped all those war bits. (Oh, wait, we did? And it was called Anna Karenina? Nice!)  The travelogues are sort of interesting, but just not enough interesting that it holds my attention for the space of an entire book.

And as I've now been through three of these books, and always felt a little pleased, but as much bored, I think it's time to cut my losses. I'm sure these are exactly the books for some people, but they fit me not particularly well.

In this one, Temeraire and Lawrence travel back from China, trying to get to England, although they don't make it in this book. They travel over deserts, through the Ottoman Empire, up through a Prussia under attack by Napoleon, his armies, and his new dragon ally, Lien, who hates Temeraire with all her might.

On the way, they are waylaid by bandits, eat camels in the desert, are locked up in the Ottoman Empire while the Empire's officials deny making a treaty with England for three dragon eggs. They escape, move on to Europe, end up in Prussia helping with the war effort there. The Prussians are too hidebound when it comes to military tactics, but Temeraire is revealed as a military genius no one will listen to.

The bits about dragon liberation, and Lawrence's reaction to his dragon partner's newly radical leanings are probably the best part of the books, but even these are not quite enough to keep me fully engaged.

Temeraire is just the best at everything, and while I get that dragons are awesome, does he need to be a linguist/strategist/political radical/budding natural scientist/anything else Novik cares to throw at him?

Partly what has finally stretched me past the point is how two-dimensional most of the characters are. Several die in this book, in what are apparently supposed to be moving deaths, and when my reaction is "which one was that again?", it's not a good sign. We've known these characters for books, and I couldn't possibly tell you one from the other, aside from Temeraire and Lawrence.

The newly hatched dragon is entertaining, though.

All in all, it's not that these books are bad. They're just a little dry, and not for me. If you like the hardcore military/travel books this is an interesting fantasy take on them, but it learns those lessons just a little too well.
Posted by Megan Baxter at 04:05