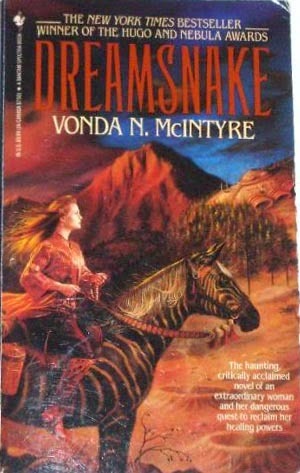 *Some Major Spoilers Below*

This was a hard book to track down. My local library did not have it, nor any of the other branches. Used bookstores turned up nothing. At last, I checked the campus library catalogue, and they had it, but in off-site storage. However, I ordered it in, and at long last, have gotten to read this only a few months behind my online book club.

My overall impression is that this in an interesting book, but I really want it to be the first in a series. The reason for that is because there are so many issues that are alluded to but not really explored. If there's a later book in which these aspects are more fully developed, then, cool, I liked this a lot. If not, well, then, there's a lot of promise that is just left to wither out on the blasted nuclear desert of this future Earth. (I presume Earth - it's suggested, but I suppose not explicitly said.)

So, here I go, off to wikipedia, to see if there was every any follow-up...and, no. So, knowing that, I feel like this is an okay science fiction book, but needed more development, because some of the ideas are fascinating, but only briefly alluded to and then discarded.

We get that there was nuclear war, and there are survivors. There are people from off-world, though, and perhaps the barest suggestion that they are humans who have been so long out among the stars they aren't quite human any more. However, we never meet them, so we can't find out anything about who they are and how they work. Nor do we find out why they will only deal with the people of one City, and never anyone else.

Nor do we find out why the people of that City seem to hate genetic engineering, nor whether or not they truly do depend on inbreeding to stay alive, and if that is the case, we also don't find out how long that's been going on, or what it has done to their society. We don't know why they might have done so. We don't actually even know if they have done so.

Most of the book is like this, unfortunately, full of promise that doesn't really go anywhere.

The book itself is about a Healer who has managed to be the first in many generations to clone dreamsnakes, a small creature that gives pain relief to those in need, and eases the passage of those who are dying. She also has two terrestrial snakes, engineered to create vaccines, anti-toxins and cures for cancer in their venom. On her first trip out, one of her snakes is killed, and she becomes convinced that she will be cast out if she returns. Of course, when we do meet the people from her village, this seems utterly nonsensical, but it's one more thing that isn't explained.

At the end, she makes a major breakthrough about how dreamsnakes procreate, that challenges everything she knew. She discovers that the dreamsnakes mate in threes, at very cold temperatures. Coming from a diploid race, she'd never thought of three parents.

Which is curious, because it seems that most people on earth have settled down into triads. Virtually everyone we meet in settled relationships are in threes, either two women and one man, or two men and one woman. Given what we come to know about the dreamsnakes, the question is why and how human culture shifted to embrace this. It's fascinating. I want to know more.

But you guessed it! It's never explored.

In my book club, much was made of one triad in which one member is never gendered. Because I'd been forewarned, I was on the lookout for it, although it takes up much less of the book than I'd been expecting. People seemed to make their assumptions both on what they thought of the name, and the characteristics of that character, with people arguing that this or that was a male or female characteristic. (Personally, I've only known female Merediths, so my unconscious assumption was female, but it doesn't really matter. The uncertainty is the point, not the outcome.) It's interesting, and it's certainly something you could entirely not notice, so I'm glad I knew to look for it.

In the long run, this is interesting, and it's promising, and it's so frustrating that it strews these ideas over the ground, and then cultivates them not at all.

I read this book as part of an attempt to read all the Hugo Nominees
Posted by Megan Baxter at 05:01