The Virgin Cure by Ami McKay 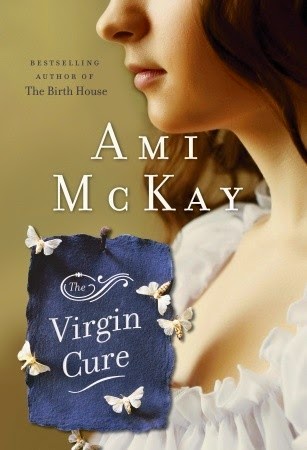 New York in the 19th century, the slums, and prostitution. That is the milieu McKay is trying to invoke in this book, and, well, it's not bad. I was never eager to get back to reading this book, but I never minded picking it up, either. If it feels a bit superficial, it also is stronger when it comes to villains than McKay's earlier work.

My main complaint about The Birth House was that while the good characters were likeable, the bad characters were beyond caricatures. She's gotten better at that. At the same time, there's still just something lacking here. It's not terrible, but this feels like it's a book written to be a bestseller, if that makes any sense. But for all that, it's good at what it does.

The main character is a girl named Moth (strangely, that's the same name we gave to our street urchin (male) character in a story-by-email two friends and I have been writing.) She's sold by her mother to be a ladies maid, but finds her new employer to be rather sadistic and obsessed with wrecking Moth's good looks so that her husband can't pay attention to them.

Moth escapes and runs back to her old home, to find it empty, and in the process of trying to survive on New York's mean streets, ends up in the house of a woman of moderately ill repute, who specializes in high-end whores, well-off clientele, and specifically, in selling the virginity of her charges for a hefty fee. Moth is pampered and taken care of and paraded in this place, while the female doctor who sees the prostitutes tries to convince Moth to escape before that day can come.

So I guess, in as much as there are themes, it's about relations between women, help and sabotage both, but I never really felt like there was anything deep there to say. Moth is an interesting character, and her intense need to survive and thrive are well done. There's a digression into a high-class freakshow that is interesting as well, but are we trying to say that independent women are themselves the freakshow at the time? Sometimes it seems to be the case.

I don't know. I feel bad that I don't have anything deeper to say about the book. There are books that I read that spark a million ideas a minute, that make me sit my husband down and prattle on to him about books he's never even read and probably never will. They provoke thought. This book does not. It's an enjoyable read, despite the fact that it's about fairly horrible practices. But it's all surface.

For surface, it's good, and if you want to read a book that doesn't make you think more deeply about this than to say "wow, poverty in the past was horrible, and these people did horrible things", then this is the book for you. It's not a book, though, that will provoke you to think about how that might compare to poverty in the present, or sex work and its exigencies, or the persistence of practices, or really, anything.

I'm being hard on Ami McKay for having written a book that I think is probably a crowd-pleaser. It's because it's good at what it does that I want to to be better. I want it to make me think, instead of trying to fill me up all by itself.
Posted by Megan Baxter at 04:43