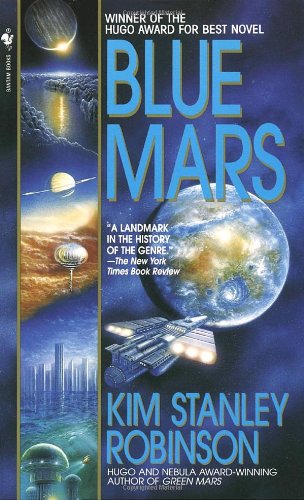 I just don't even know where to start with this book. There are so many parts of it that aggravated me nearly to the point of distraction, and then there would be a part that was pretty good, and then there would be frustration again, and sometimes I'd want to tear characters out of the book and throttle them. Is it really that bad? Or is it just that I am far too aggravated by what is really a defining feature of many of Robinson's characters in many of his books?

I finally found a way to sum up how his characters drive me nuts - for so many of them, it's like they've never read fiction. They have no capacity for empathy, no real recognition of other people as people, no idea that a middle ground might even be a conceptual possibility.

It's largely although not exclusively, his women characters, and I would enlarge this to include 2312 as well as the three books in this trilogy. They're so mono-focused, often selfish, but even if not, so utterly incapable to seeing other people as people most of the time that it's literally stressful to read. Their points of view are the only points of view, and everyone else is, not wrong, but sort of...not real. Or real only in the sense of being an implacable inhuman obstacle.

It's least excusable in this book for Ann Clayborne. Ann has always been infuriatingly monomaniacal, with an idee fixe about a mile wide, and she constitutionally can't agree with anyone - even if they're on her side. Where this book goes really off the rails for me is a scene near the beginning where her psychiatrist, in a casual conversation with a mutual friend, tells the mutual friend, that oh, it's because she was abused as a child.

I mean...what? A) that's just a stupid insulting pat answer that's thrown out casually - oh, you can ignore her, because she's like this because she was abused. And b) for her PSYCHIATRIST to be the one to tell someone else, not because the other person needed to know, just, you know, because it came up in conversation?

It's insulting, it's aggravating, and I almost threw the book across the room.

It's also frustrating that when she "mellows," we no longer get any scenes from her point of view. It's all from Sax.

Then there's Jackie, and Zo, and Maya, not to mention all the other women who can't see anyone around them as real in the other two books. There are a couple of male characters in earlier books with the same obsessiveness, but it really does seem to be a female trait in many of Robinson's books. Not all his women, but enough.

All of these people, all of them, they need to sit down and read some fiction, and realize that every issue does not need to be argued in the key of shrill.

Other than that, this book skims over decades and decades, occasionally alighting, but it really is a bird's eye view that swoops down to individual characters every once in a while. There were sections I enjoyed a great deal, sections that drove me to distraction, and some that just bored it. It's such a mishmash, and I don't know how to put it all together.

Except to say that I think maybe KSR and I are on shaky grounds. Our viewpoints may just be too different for a compatible author/reader relationship. However, unlike most of his characters, I'm willing to give it one more shot, see if the cynicism gets easier to bear.