The Border by Robert McCammon 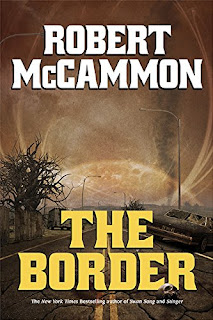 *There Are Spoilers Below, But You Probably Don't Want To Read This Book Anyway*

This was...not a good book. In a whole lot of ways. It wasn't so bad as to be unreadable, and thankfully fell into the realm of "so bad it's at least entertaining." That's a very narrow window, and McCammon just about nails it.

I bought a Humble Bundle a little while ago, and this was one of the books. From the screen from which I download the books, I can't see the authors, so I picked a book at random. (Literally. Dice were involved.) That got me this book, and it was not one of the ones for which I bought the Bundle, but what the hey. Also, I remembered a book by this author on our physical bookshelves, belonging to my husband. He's a pretty astute reader, so maybe it was going to be good?

Some of the things that are wrong with this are on the level of editing - mistakes easy to make in writing, but which should be rubbed out by a basic editing pass. Things like using the same word several times in a row in a couple of sentences, done without intentional effect of creating an echo. Or stacking similes - telling what something is like twice, separated by a comma. Like jelly being spread on jam, like flattening mud with a...I don't know, you get the idea.

The next set of problems are where most of the hilarity came from, as this book included one of the most amusing and terrible sex scenes I've ever read. But I think you may need some context before that.

A couple of years ago (months ago?) the Earth came under attack. Well, not under attack per se, so much as two alien races came to Earth to continue pounding the shit out of each other in an unending war. Humans are the not-specifically-intentional casualties. The number of people left is dwindling, most have either been killed or given into despair and killed themselves. Some have turned into zombies. (We keep piling horror idea on horror idea here, another idea that is perhaps wise.)

A young man, Ethan, shows up without a memory at one of the few human refuges left, and he's got weird earth-and-air-and-energy bending powers. Turns out he's been reanimated by a third alien race, a lone peacekeeper alien sent here by, let's call him God, to protect the humans from the interstellar war they are inadvertently in the middle of. (I'm letting that dangle because it's the least of the grammatical sins this book has spawned.)

One of the alien races, the Gorgons (the others are the Cyphers), has taken a small town hostage and is keeping is safe, mostly because the Gorgon queen is sleeping with the randy Big Man in town, a televangelist who founded it.

And that's when the hilariously bad sex scene comes in. It hits a peak early with lines like this:

"she began to play with that large part of him that she seemed to find as fascinating as any female who had never flown between the stars."

Then, it goes on to detail the sex, which includes the alien queen growing tentacles mid-sex and milking the televangelist. (I shit you not, that is the actual verb used.) And then it finishes off with this howler:

"But it was no matter to him now, for though he feared this creature, and when she called him by that device planted in the back of his neck, he had to go into the bathroom and throw up, he was so afraid…he had to admit in the long-lingering afterglow that she was one great lay."

There's only that one sex scene, but wow, is it a doozy. On top of the hilariously bad prose, there's the uncomfortable truth underneath that this is, without question, a rape of the male character, but it feels like neither the character, or worse, the author, really gets that, or allows that to come into the story. Instead, it's all about his sexual prowess, all the women he's fucked around with, being the kind of alpha male that of course the alien queen would want to have sex with. That it's forced is definitely there, but not engaged with at all.

The televangelist, Jericho Jones (or something alliterative, I think that's it) is sent with a Gorgon sleeper agent to try to capture Ethan to find out what he is. Ethan, meanwhile, goes with a rag-tag crew to find the American president, who has suffered from a nervous breakdown and is being kept in the dark on the true state of the American people, I mean, the human race. (We actually  never hear much about the rest of the world.)

The solution to all the problems lies, of course, in Area 51, and there they find, wait for it, a machine with which the peacekeeper can rewind time to just before the aliens came and wrap his energy around the Earth to protect it in perpetuity.

I shit you not. The denouement is a rewind so none of it ever happened. A few people retain their memories, but there are very damned few ways you could pull an ending like this off and have it not suck. This book does not achieve it.

But this book was so bad it was mostly funny. It was never terrible enough that I had to throw it across the room, though it frequently was bad enough that I had to tell people about the nonsense I'd just read. So really, it's in a rare sweet spot of awful.
Posted by Megan Baxter at 09:00